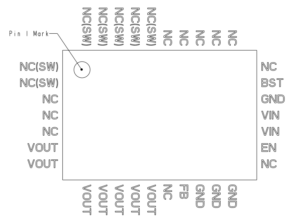 Recommendation 4: The large thermal pad underneath the device must be connected to the system ground plane through as many vias as possible. The drill diameter of the vias should be 0.33mm, and the vias must have at least 1-oz. copper plating on the inside wall, making the finished hole size around 0.2mm to 0.26mm. Do not use thermal reliefs or spokes to connect the vias to the ground plane. This connection provides the path for heat dissipation from the converter.

Recommendation 5: Multiple small vias (the same size as the thermal vias discussed in recommendation 4 should be used to connect ground terminal of the input capacitor and output capacitors to the system ground plane. Put the vias under the capacitors along the edge of the GND copper closest to the Voltage copper. These vias connect the input/output filter capacitors to the GND plane, and help reduce parasitic inductance in the input and output current loops. If the vias cannot be placed under CIN and COUT, then put them just outside the capacitors along the GND slit separating the two components. Do not use thermal reliefs or spokes to connect these vias to the ground plane.

Recommendation 6: The VOUT sense point should be connected at the last output filter capacitor furthest from the VOUT pins. Keep the sense trace as short as possible in order to avoid noise coupling into the control loop.

Recommendation 7: As with any switch-mode DC-DC converter, try not to run sensitive signal or control lines underneath the converter package on other layers. 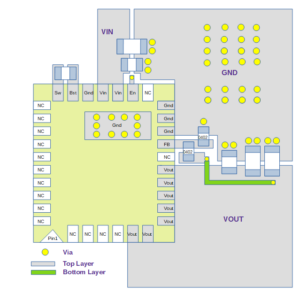 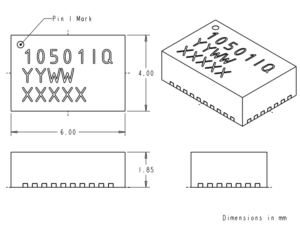